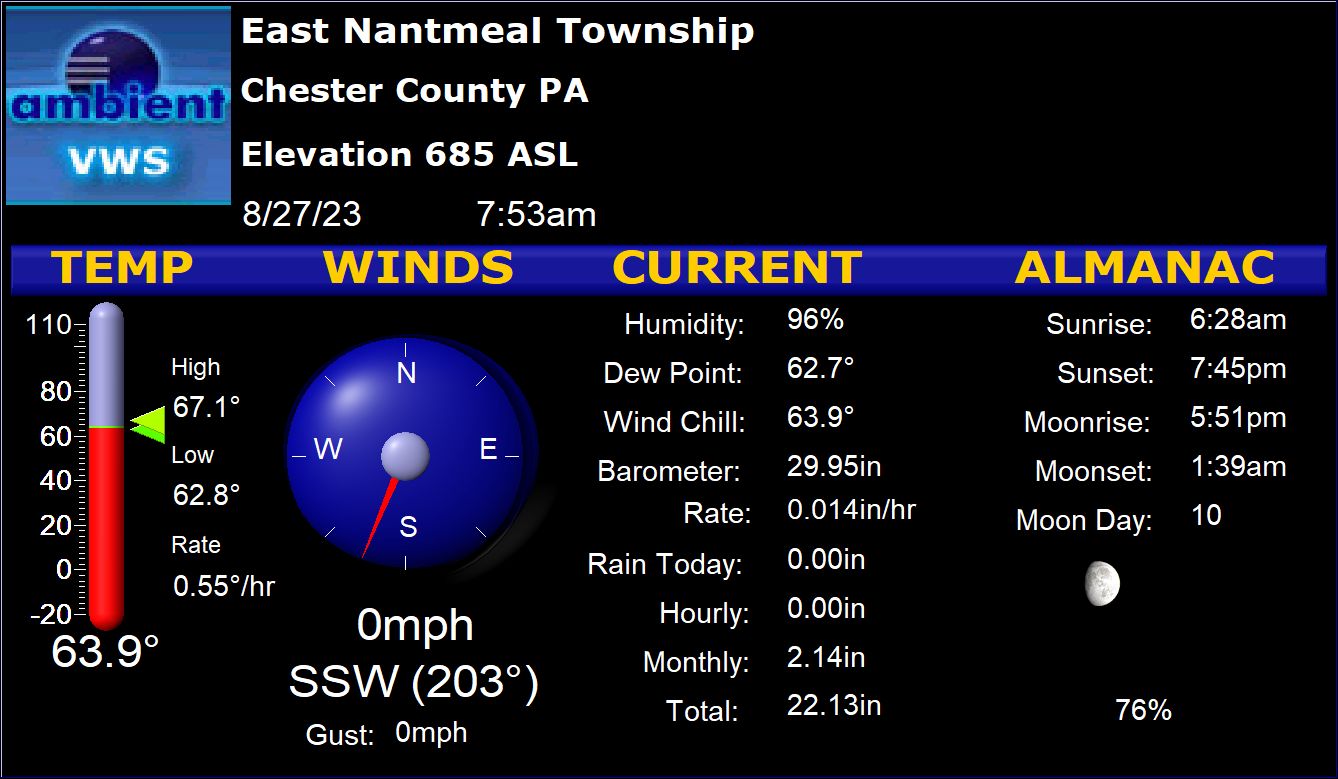 Greetings and welcome  to the East Nantmeal Township, Chester County weather page. This station records continuous weather observations utilizing the Davis Vantage Pro Wireless Solar weather station. This station has detailed daily weather observations for the last 127 years dating back to January 1894 for Western Chester County in Pennsylvania. Please note that my weather database uses a detailed blend of National Weather Service validated observations from January 1894 to November 2004 and my daily station observations since December 1, 2004. This newer data (since 2004) has been statistically analyzed and validated to ensure site reliability and comparability, using statistical data hypothesis testing. Special thanks go to the following National Weather Service Cooperative observers for their efforts in keeping such detailed daily records for the County since way back in 1894. W.T. Gordon (1894-1930); Howard Pyle (1930-1946); the Philadelphia Electric Company in Coatesville (1946-1982) and Joe Steiner (1983-2004). This page is updated frequently so check back often! Please feel free to email me with your comments, requests or questions regarding Chester County PA weather to chescowx@outlook.com. Also please be sure to follow me on

Current observations have been observed here in beautiful East Nantmeal Township in Northwest Chester County, PA since November 25, 2003. East Nantmeal Township lies in the Nantmeal Hills within the Welsh Mountain anticline, The North Valley Hills lie just a few miles south of the Chester County weather station. The Township and this weather station is located about 40 miles northwest of Center City Philadelphia and 85 miles west of the Atlantic Ocean. The general topography of the area is rolling hills. The Western Chester County Weather Station lies at 685 feet above mean sea level midway between the towns of Glenmoore and Ludwig's Corner, PA. The Welsh Mountain, which is the highest point in Chester County rises to 1080 ft. above sea level within 8 miles of the East Nantmeal Station. Much of Western Chester County PA lies in elevations over 600 ft ASL. The National Weather Service split out this zone (PAZ101) from the lower elevations seen across most of Eastern Chester County (PAZ102) a few years ago to better distinguish the climate differences attributed to relative elevation and more inland location from the Atlantic Ocean.

Typical of the Piedmont Plateau, the climate is classified as Modified Humid Continental due its proximity to the Atlantic Ocean (85 miles east). However, due to its inland position and relative high elevation many winter storms that mix with or turn to rain in Philadelphia will remain snow in the higher elevations of Chester County.  Elevations in East Nantmeal Township range between 650ft to 850ft ASL.  In the relative higher elevations, here in Chester County (above 660ft above sea level) the County averages 36.7"of snow each winter based on data from 1983 to Present. Snowfall in Chester County is quite variable year to year with the snowiest winter recorded in 1898-99 when 95.0" of snow fell. In fact this area of Chester County and just 7 miles west of East Nantmeal (Morgantown PA) are where the 2 greatest Pennsylvania snowstorms have occurred. The greatest being the 52.4" snowstorm that ended on February 14, 1899 and the second greatest Pennsylvania snowstorm being the 50" of snow that fell in Morgantown ending on March 21, 1958.  The second snowiest winter in recorded local history recently occurred during the winter of 2009-10. During that winter 86.6"of snow fell, this includes the 62.8" of snow during the month of February alone. Seasonal snowfall has exceeded 70" six (6) times since records began. Statistical analysis shows that Chester County can expect a single storm to exceed twenty inches (20") on average once every 10 years. However, during the last 10 years here in Chester County we have experienced 2 snowfalls that have exceeded the 20" mark - February 9-10, 2010 with 26.8"February 16-17, 2003 at 21.5". Snowstorms will exceed 10" approximately every other year. Snowstorms of 6" or more should be expected at least twice each winter.

This area averages significantly (12" to 16") more snow then areas on the Atlantic Coastal Plain such as Philadelphia; New York City; Long Island, New Jersey, and Delaware. One of the great examples of the climate difference between here and the coastal plain at Philadelphia was the February 23, 1987 storm that resulted in 23.5" of snow here in Chester County - yet only accumulated to 6.8" at the Philadelphia International Airport. Weather systems that affect the Chester County area either develop in the Midwest and are steered eastward by the prevailing westerly flow aloft or they form in the southeastern United States and track northward along the Atlantic Coast as powerful "Nor'easter"  The long overland trajectory of any  Arctic high pressure systems in conjunction with a down slope component off of the Appalachian Mountains to the west of Chester County considerably modifies the accompanying cold and dry air masses so that upon reaching Chester County they have warmed and gained moisture either from the Gulf of Mexico or the Atlantic Ocean.

Summers are warm and rather humid. Usually highs reach into the mid-80s with nighttime lows near 60 degrees. However, summer nights in the 50's are to be expected several times each month of the summer season. The occasional maritime influence tends to produce a uniform weather pattern, resulting in occasional prolonged Hot, Hazy and Humid periods. During the period June-August, daytime highs will only reach the 90-degree mark on average about 5 times per summer season here at 685 ft above sea level. This is in sharp contrast (see detailed analysis link below) to what is reported in the heat island where the Philadelphia International Airport (KPHL) is located near the urban center of Philadelphia at just 59 ft ASL on the Atlantic Coastal Plain.  Here in Chester County on the Piedmont Plateau summer low temperatures will rarely go lower than 45 degrees. The all-time record high was 107 degrees set back on August 7, 1918. 100-degree readings are almost non-existent in Western Chester County. and has in fact only occurred one time in the county, this occurred on Augusts 2, 2002. Cloud cover is at a minimum during the summer season, as better than 60% of available sunshine is received while nights are generally clear. Prevailing winds flow from the south-southwest averaging 8 mph. Summer rainfall is adequate, falling for the most part as the result of thundershowers which are observed on an average of 22 days.

Cloudiness persists to a much greater degree in the winter due to the increased frequency of cold fronts and coastal low-pressure systems known as Nor'easter. Prevailing winds during the winter time are from the west- northwest averaging 10 to 12 mph. Daytime highs average in the Upper 30's during January with nighttime lows generally around 20 degrees. A normal winter season will have 115 days with sub-freezing low temperatures. Around 23 winter days will not make it to the freezing mark for a high temperature. Only one day in recorded history did the temperature stay below zero all day; on January 19, 1994, the high for the day was just one (1) degree below zero after a morning low of eleven (11) degrees below zero. It is interesting to note that we did not experience a below zero reading from February 1996 until January 24, 2011 when we registered an AM low of 1.2 degrees below zero. This was the longest such stretch in recorded history. We average only one (1) below zero reading each winter season.

Summer-like readings have been experienced in the winter, but are rare, the highest being 77 degrees on February 25, 1930. The all-time lowest reading was nineteen (19) degrees below zero on January 14, 1912. The first snowfall of any consequence may occur as early as November but is much more likely in December. There is a 35% chance of a White Christmas in Chester County. In a normal winter, at least two snowstorms will exceed 6 inches. The largest individual snowstorm (3 days) was the 53-inch blizzard that ended on February 14, 1899. The greatest snow depth recorded in Chester County was the 69.8"snow depth recorded on February 15, 1899. The February 1899 snowfall of 69.8" represents the record monthly snowfall for this area. In January1996 over 36" of snow was on the ground following the Blizzard of January 7-8. Historically however snow cover does not persist for any great length of time, an inch or more of snow is observed on an average of 31 days and six inches or more 6 days annually. The longest period of snow cover an inch, or more was 63 days from December 9, 1995 to February 9, 1996, the threat of snow diminishes rapidly after mid-March. However large snowfalls do continue to occur as evidenced by the 13.7" snowfall on March 31 & April 1, 1997, that same system produced only 4" of snow in Philadelphia.

Spring and fall are the transition seasons. Prevailing winds are from the west-northwest at the start of spring but swing back from the southwest by late spring. As fall progresses the prevailing flow gradually changes back to a west-northwest flow once again. Wind speed averages 8 to 10 mph during both spring and fall. By the latter part of April daytime highs in the 70s are noted more and more frequently; and after the warm summer, these same seventy-degree readings may be observed into October. These mild dry fall days with plenty of sunshine along with the autumnal change in colors amidst the rolling hills of Western Chester County make the fall season one of the most pleasant times of the year.

A little over one half the annual precipitation usually falls in the spring and summer. The greatest monthly total was 17.81 inches in August 1955, and the maximum 24-hour rainfall was 8.28 inches on September 16, 1999 this resulted from the effects of Hurricane Floyd. While primarily a warm season phenomenon, thunderstorms have been observed every month of the year. On the average 9 days with thunder are recorded in the spring, 5 in the fall, and one during the winter, which when combined with the summer statistics gives an annual average of 37 thunderstorm days. As evidenced by Floyd - Hurricanes and Tropical storms have occasionally tracked inland enough to provide heavy rain and wind.